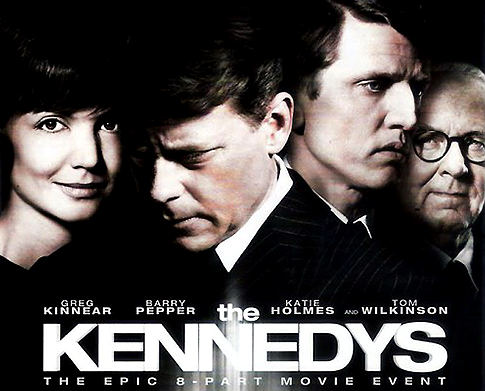 It’s been a couple weeks since the History Channel abruptly decided to shelve its Kennedy miniseries starring Greg Kinnear and Katie Holmes and still no other network has stepped in to pick it up.   Some believe the project was doomed by conservative bias while others cite too much dramatic license.  Here’s some of the most egregious errors:

1.  Kinnear insisted he could stay in character as JFK better if everyone called him “Greg” when the cameras were rolling.

2.  It turns out that Jackie Kennedy did NOT carry around a copy of Dianetics everywhere she went.

3.  There’s no way White House televisions in 1960 could’ve had access to the Fox News Channel.

4.  According to one historian, a sex scene lacked credibility not because there’s zero proof it happened, but because he could “totally see” Kinnear’s “cock sock.”

5.  The entire Kennedy administration wasn’t the dream of an autistic child.

6.  Probably not a good idea casting the guy who’s not good enough for Meg Ryan in “You’ve Got Mail” as one of history’s most desirable men.

7. RFK didn’t get the nickname “Bobby” because he had no arms or legs.

8.  Though it made for a more frightful climax, Lee Harvey Oswald and JFK were not roommates who met on Craigslist.

And the miniseries’s biggest factual fallacy…

10. Though filming the entire series in real time à la 24 was an interesting creative choice, it probably wasn’t a good idea to choose 8 hours where the Kennedy’s mostly slept.