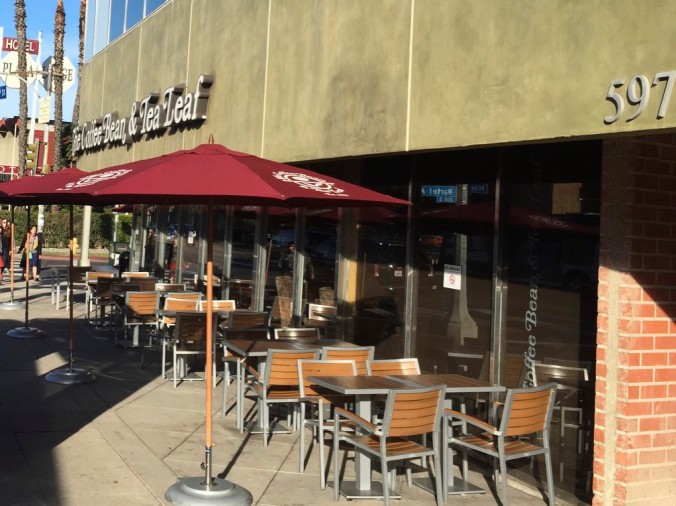 This is the Coffee Bean across from The Palazzo at Park La Brea (near the Grove).  It’s nothing special.  There’s ample outdoor seating. Very little indoors.  It’s the kind of place the 45,000 people who live at Park La Brea probably frequent, but otherwise there’s no reason why you’d ever need to step foot in this place.

The coffee shop itself had no working wifi, and the free wifi from the neighboring motel was so bad, I couldn’t even post this short review from there.

Now, for a bigger rant about Coffee Bean overall — their smartphone app sucks.  It’ll log you out right when you’re ready to pay (slowing down what should be a quick process). It works by flashing a numerical code on the screen that the barista needs to manually enter into their register.  How quaint.  Oh, and the app took 17 dollars from me.  17 bucks just vanished from my account.  The people at CB corporate were nice enough to look into it and refund the missing money, but the manager on duty when the money actually disappeared — it happened while I was standing at the register, the barista even confirmed that the money was there, before it mysteriously disappeared — was pretty unsympathetic about the whole thing.

If you like CB’s drinks, keep going.  I just can’t recommend using their app.  Oh, and their rewards program is terrible.  Unlike Starbucks, where any 12 drinks equals a free purchase, the CB’s reward system is point based.  Every dollar spent is supposed to equal 1 point. Except it doesn’t, because they round down to the nearest dollar during each transaction.  In other words, if you spend $3.95, you only get three points, and those 95 cents never get counted, ever.  To get those 40 points, you’ll have to spend a lot more than $40.

Next time: I’ll review the absolute best place to get some work done if you’re near Beverly Hills/West Hollywood.