This one will be short, as this location can be summed up quite easily: Small.

Parking:  Metered on the street, but if you’re willing to walk a couple blocks, Larchmont Blvd. has free 2 hour parking on the other side of 1st Street.

Ambiance:  Quaint. Feels like a Coffee Bean you might find in a mall or airport.  It’s standing room only on the inside, and not because it’s busy, but because there are no seats of any kind.  If you want to see one of the many famous people who live in the neighborhood (or those working at the nearby Paramount Lot), you’re better off going to the Starbucks or Peet’s across the street. (If you care about such things, which you totally shouldn’t.)

Amenities: No outlets to speak of.  No bathroom.

Wifi: Even with no one else apparently using it, it’s a rather mediocre 1.83Mbps downstream and 0.41Mbps upstream.  Servicable for reading most websites, but if you need to download/upload a big file, it’s not the best.

Ability to do work here:  Not bad if you’ve got plenty of battery power, a healthy bladder, and the weather is decent.  Before coming here, I went by the neighborhood’s Starbucks and Peet’s first, which are larger with more seating (especially inside), but both were packed.  If one of them had inside seating available, I’d be there right now.   In a pinch, though, it’ll do, as it is for me right now.

This is my 2nd Westside coffeehouse review.  You can read the first one here.

Location:  The corner of Beverly Blvd and Robertson Blvd, near The Ivy, at the end of a street full of high-end boutiques you should never actually buy anything at.

Parking:  Metered parking on the street, but if you take a moment to drive through the nearby neighborhood, you should be able to find a free spot that’s good for a couple hours.

The Vibe:  It’s technically in West Hollywood, but the atmosphere is all Beverly Hills circa 1995.  The place is a magnet for well-to-do locals who have nothing to do during the day (and the tourists who love them).  At least, the locals want you to think they’re well-off. They love to talk rather loudly about their latest “projects,” making sure everyone in the establishment knows they’re a producer/entrepreneur/investor/whatever.  Posturing like that doesn’t bode well for authenticity.  Either way, because most of the clientele are not confined by “jobs,” the place is always busy.  Fun fact:  If you see a tourist with a really nice camera that looks like he hasn’t showered in a week, he’s no tourist at all!  He’s actually a paparazzo waiting for a reality “star” to show at one of the many Kitsons on the block. (Yes, I said many Kitsons, as in more than one. FYI: The last time an actual celebrity shopped at Kitson was in 2006.)  How do the paparazzi know when a wannabe celebrity is coming to the block?  Because the “star” tips them off.  (Another thing that doesn’t bode well for authenticity.)

Seating:  Inside there’s room for about 16 to sit (6 two-tops, 1 larger table).  Outside there are several more tables, but they’re mostly lined up against a long bench with oddly placed armrests that limit the number of people who can sit there.  Whether inside or outside, if you can find a seat, the good news is that it’s probably within reach of an electrical outlet.  The outlets can be hard to spot (one is even in the ceiling), but they are there if you look for them.

Wifi:  Typical Starbucks wifi powered by AT&T.  As I write this, with four customers using laptops and a few more using tablets & smart phones also possibly on the network, I’m getting a maximum download speed of less than 1Mbps.  0.89 to be exact.  That blows.  It’s so slow, I couldn’t even post this review from the cafe. I had to cross the street to use the wifi at a Coffee Bean to post it.  Because Starbucks’ wifi networks aren’t password protected, there’s probably a lot more people on it than there appears to be.

Food & Drink:  It’s Starbucks.  If you find yourself actually coming in here and waiting in line for something to drink, it’s only because you really wanted to tell people you went to Starbucks.

Music:  Currently playing something that I can’t make out.

Distinguishing Feature:  The $100,000+ car with a handicapped placard parked just outside at an expired meter, driven by an asshole who clearly has full use of all their limbs and not a single shred of decency.

Ability to get work done here:  If you need Starbucks-branded coffee and can find a seat, sure, you could get some work done if you really have to.  But you’ll need headphones, a high tolerance for Persian cologne, and blinders if you’re easily distracted by sideboob.  Otherwise, just cross the street where the larger Coffee Bean offers more seating and better Wifi.

One of the perks of being a (mostly) freelance writer — always a change of scenery.  I do a lot of my work out-and-about, at various places on the Westside of Los Angeles.  My writer-friends are always asking me what I think of certain spots so I figured, what the heck, why I don’t just review them all?  First up is the Coffee Bean on North Beverly Drive in Beverly Hills, which is not to be confused with the Coffee Bean on South Beverly Drive (just a few blocks away) or the one on Beverly Blvd (about a mile away). 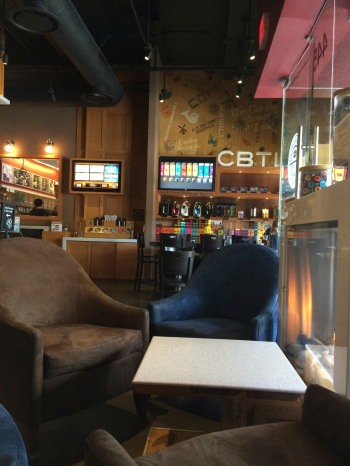 Parking:  It’s near two city-run garages that offer free parking for up to 2 hours before 6pm. Nice.

Seating: By my count, at least 20+ inside.  Another 10+ outside.  In total, 8 two-tops, two “lounge-y” areas with more plush seating, one larger table that three or four people could sit around, and two bars.   One is a communal “power bar” that seats 7 with individual outlets for every seated patron.  There’s also a slimmer bar against the wall that sits another half-dozen people who don’t care about power (or having their backs stared at by people waiting for their drinks).

Food & Drink:   Same selection as any other Coffee Bean as far as I could tell.

Typical Customer:  Appears to be mostly people who don’t want to wait in line at the more crowded Starbucks across the street.  The power bar attracts laptop wielders willing to sacrifice space for some much needed juice.

Wifi:  Typical Coffee Bean wifi (i.e. requires a passcode that is readily visible on their infotainment screen).  At 11:50am on a Monday, with two laptop users, a guy on an iPad, and a couple smartphones appearing to be on the network, the download speed was 4.38Mbps.  I haven’t run this official speed test anywhere else yet, but based on personal experience, I have a feeling it’ll beat the other coffeehouses in the neighborhood (two Starbucks, a Peet’s, and another Coffee Bean).  The upload was a dismal 0.51Mbps.  So don’t plan on Skyping, but you know what?  You should never Skype at a coffeehouse anyway.  It’s tacky and hogs the bandwidth.  Also worth mentioning:  My Dropbox folder had no trouble syncing over the wifi, but my Google Drive folder was “unable to connect.”

Distinguishing Trait:  The gas fireplace fully encased in glass that produces no heat.  Any perceived warmth comes from the emptiness of your soul (or the people sitting around you, as around it are the most popular places to sit). 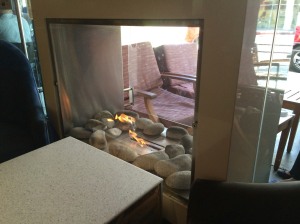 Ability to do work here:  Pretty good, actually.  There’s almost always seating, and because it’s never all that crowded, it’s never all that loud.  If you have a meeting anywhere in Beverly Hills and want to get some work done before or after, this is an excellent choice.